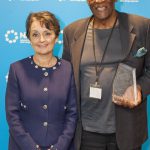 The lifelong work of drug addiction treatment leader James Pitts from Macarthur-based Odyssey House, one of Australia’s largest residential rehabilitation services, has been recognised with a Lifetime Achievement Award in the 2016 NSW Non Government Alcohol and other Drugs Awards, presented by the Network of Alcohol and other Drugs Agencies (NADA).

Mr Pitts has worked in the field of alcohol and other drugs since 1978 and at Odyssey House NSW since 1984, where he has overseen the treatment of more than 30,000 men and women over the past 32 years, reducing alcohol- and drug-related problems in the community and helping people have positive life-changing experiences to become confident, contributing members of society.

Well known as the chief executive officer of Odyssey House, which he has led for 32 years, Mr Pitts recently started a new role as senior adviser to the organisation, focusing on clinical services, fundraising, supporter relations and staff training.

In May Mr Pitts handed the reins to incoming CEO Julie Babineau, who has extensive experience in the health and social issues sectors and was previously CEO at the NSW Justice Health and Forensic Mental Health Network, which delivers health care to adults and young people in contact with the forensic mental health and criminal justice systems, across community, inpatient and custodial settings.

“On behalf of the Odyssey House board, staff and clients, I congratulate James on his inspirational achievements and well-deserved recognition for all he has done for Odyssey House, the treatment sector and the people we help,” Ms Babineau said.

“James is a committed advocate for people with drug dependence and has led and inspired hundreds of staff at Odyssey House over his long tenure.

“I am honoured to be continuing James’s legacy and look forward to working with the highly committed and dedicated staff who support residents to overcome their dependencies on alcohol and other drugs.”

Announced at a gala dinner in Sydney on 6 June, the NADA Awards acknowledge the significant contribution of the non-government sector in reducing alcohol and other drugs -related harms to NSW communities through leadership, program design and delivery and dedicated workforce.

In accepting his award, Mr Pitts said he was very touched to receive the Lifetime Achievement Award from the Network of Alcohol and other Drugs Agencies, which he has been associated with since 1984.

“I thank the various boards of Odyssey House who have supported me in my endeavours over many years to provide the highest quality care for people dependent on alcohol and other drugs.

“In addition I thank the many staff who have been a part of my journey and who have had the hard job of providing the direct services to the people who utilise our services.

“Lastly, but by no means least, I would like to thank the many men, women and their dependent children who have found Odyssey to be a ‘Calm in the sea of addiction’, which has enabled them to return to living a life of safety and productivity,” Mr Pitts said.

Highly respected in the Australian and international treatment sectors, Mr Pitts has contributed to state and national drug policy through working parties and expert committees and has served on various boards of peak bodies. He is a founding member and board director of the Australasian Therapeutic Communities Association, which instituted the annual James A Pitts Oration in 2014 to honour his dedication to the field.

Mr Pitts’s extensive knowledge of and willingness to speak out about alcohol and other drug issues mean he is regularly called upon to speak publicly and in media interviews, featuring in hundreds of articles and news broadcasts over the years.

Mr Pitts has authored many research papers on addiction treatment. His research thesis for his Master of Arts in Clinical Drug Dependence Studies (Macquarie University, 1991) confirmed that the longer a person remains in treatment, the better their chances of remaining alcohol/drug-free in the long-term; this a cornerstone of treatment at Odyssey House.

In addition to his NADA Lifetime Achievement Award, Mr Pitts was inducted to the National Drug and Alcohol Awards Honour Roll in 2007 and received the Ted Noffs Foundation Award for Individual Achievement in the Alcohol and Other Drugs Field in 2000. He was named a True Leader of 2014 by The Australian Financial Review’s AFR BOSS Magazine, honoured as runner-up in the Not-for-Profit CEO of the Year Awards in 2008, and awarded the Australia Day Medal in 2001.

Mr Pitts is highly regarded for his contribution to western Sydney, where Odyssey House is based. He was honoured with a 2013 University of Western Sydney Community Award for work including enabling medical students to gain experience through placements at Odyssey House.