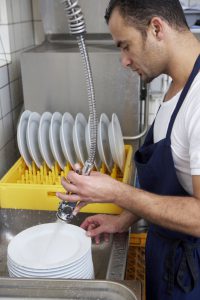 Odyssey House 2015 Graduate of the Year, Michael, 37, has broken the destructive habits of 16 years of addiction, changed self-defeating attitudes and remade himself from the outside in.

Michael grew up in Perth with loving parents and friends, but the birth of his sister Rachel, who had Down syndrome, changed his image of himself. “As a five-year-old, I didn’t understand why my baby sister got all the attention. I told myself something was wrong with me, that I had to do more to be seen as special. I got into art as a way to stand out,” says Michael.

“Despite my winning language and arts scholarships, my parents decided a private boys’ high school would suit me. When my best friend went to different school and didn’t want to be friends anymore, I decided that meant I wasn’t cool enough. I became rebellious and acted out, and made friends with people I thought were cool.

“Around 16 I started drinking and smoking, and experimenting with pot and LSD. I found friends who were into the graffiti and hip-hop scene. There was a criminal element and I started selling drugs, but only occasionally used drugs myself.”

Michael’s world imploded at 19 when his teenage sister suddenly collapsed and died in the middle of the night, despite his efforts to save her.

“I told myself I’d failed as a brother and the people I love will leave me. The intense emotion was too much. Within a week I was using heroin – it stopped the racket in my mind and made me feel good. Within a few weeks I was using every day and within a week of that I was addicted.”

Michael was functional despite his addiction, studied visual arts at university and set up his own business in the arts sector, but he continued his anti-social and criminal behaviour and landed in prison a couple of times. He later became addicted to benzodiazepines, manipulating doctors to get Valium and Xanax prescriptions.

“I still thought I was clever enough to control my addiction. I used heroin substitution and treatment therapies so I wouldn’t feel sick from withdrawal and could still use drugs and run my business. Eventually I became emotionally bankrupt and started losing work and friends, yet I was frightened about what it would be like to not use drugs.

“My parents persuaded me to get help. I tried to stop using a few times before Odyssey House, but eventually I knew it was prison or death or rehab.”

Michael spent two weeks in Odyssey House’s Withdrawal Unit before transferring to the Residential Rehabilitation Program, but quickly learned the difference between ‘being clean’ and ‘being in recovery’.

“I’d stopped using drugs but I had a lot of work to do to find out who I really was, how I used drugs to escape from reality and avoid conflict, and how my negative perceptions and lack of self-honesty held me back.

“I had two massive revelations at Odyssey House that changed my life.

“I discovered I needed help from other people to overcome my addiction, and the therapeutic community gave me that support. I also learned I could deal with conflict without using drugs. That was such a gift, plus the friendships I’ve made because of that awareness.

“My parents visited often during my 14 months at Odyssey House. My mother says I was like a mummy slowly being unwrapped!

“Now, my parents have moved from Perth to live near me. Along with ongoing support from the Odyssey House community and a 12-step recovery program, I know I can make it without drugs. Each day gets easier. I thank Odyssey House for saving me.